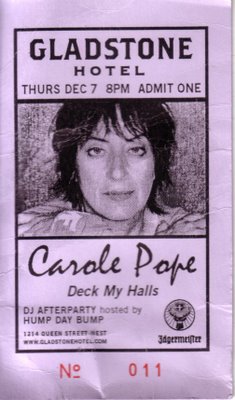 When 2006 rolled around I didn't know it was going to be a retro year. It's like I woke up in the hey-day of the New Wave era. If it wasn't the Buzzcocks or Charlatans UK, it was Robert Gordon and Billy Bragg. If it wasn't them it was bands that owed their existence to music created in those years between 1979-1982...the Arctic Monkeys who cop a few licks from the Jam and the Raconteurs who are reviving the Detroit Garage scene. So it's fitting I come to close out the year with a trip back down memory lane to see Carole Pope.

I first saw Carole Pope in 1974 doing a Saturday matinee show at the Colonial Tavern on Yonge St. This venue was a 'home away from home' for blues greats like John Lee Hooker, Sonny Terry and Brownie McGhee. It's days as a 'happening' place were numbered. So were Yonge Streets. No more Meet Market, no more Nickelodeon. I was still too young to drink at this time, my older cousin happened upon her set the day before and was so blown away he convinced me to make my way over and try to get in. Security wasn't what it used to be, if it was ever anything.

There were about 5 people in the place as Carole and Kevan Staples, her partner in Rough Trade, went through the gyrations. I would have said 'motions' but once you've seen Carole you know they're gyrations. This was very early in their public career, before they had a recording contract.

In tight leather, front zipper opened to the mid-rif, hand jammed deep into her crotch as she screamed her way through the hormonally fueled paeon to lesbian lust unrequited, High School Confidential, she was like nothing I'd ever seen before. Not even on film as this was pre-cable, pre-VHS and pre-porn explosion. I was a fan.

A couple of years later I saw her do two sets at a punk-club called The Edge, in Toronto. The New Wave scene was percolating in Toronto. We had live music clubs up the wazoo, from Larry's Hideaway to Lee's Palace to that club on St Joseph's St where I saw John Cooper Clarke. The Edge had been home to two other shows of an overtly sexual nature, at least an alternative style, as I saw both Wayne County and the Electric Chairs as well as post-op, Jayne County perform live sets. Now Carole's 'alt-lifestyle' was not so apparent to me back at the dark, empty Colonial. There were no girls in the audience then, it's a tap house. So, naturally, I thought she was talking to me from that stage. Turns out not. Over the intervening years Rough Trade developed a hard-core following among the sisterhood. This was a little more apparent in the packed confines of The Edge where sapphic love dolls performed tongue dances in every nook and cranny of the place. What else they used their nooks and crannies for I can't relate here.

An interesting side-bar to this show, local comic Martin Short, a regular at the Toronto chapter of the Second City Review and a high-school friend of Carole's, was opening the show. A weird combination, I thought. It's not like the fan bases will have a lot of overlap. It's more a Venn Diagram with two circles that never meet. Well, not never, Cece and I were there. Most of the audience was not in the mood for a stand up act. One gentleman in particular figured he'd voice his opinion using a mug of beer. Martin stood onstage, soaked and pointed out to the audience to ask: "How many people think that guy is sitting beside someone who is saying 'Man, you're an idiot!" (loud cheers) "How many people think that guy's girlfriend is thinking twice about putting out later?" (loud cheers) "How many people think that guy has a dick 'this' big?" (holding fingers one inch apart to loud cheers). Regained a little respect, Martin did. What he didn't do is show up the next night to finish the stand.

Besides being on the cutting edge of the performance art that is live rock n roll, Kevin and Carole also delved into the outer reaches of available recording technology. In search of a sound as vital and raw as Caroles weapons they recorded a 'direct-to-disc' record of their material, ostensibly a live performance as they cut the two sides 15 times each and selected the best two recordings. Once the disc started recording it took everything, even the between record breaks are actually live dead air...one mistake, the side was fucked. They printed 30,000 copies. Mine is number 9494.

For much more on the history of Rough Trade take a look at this page:
Much More on Rough Trade Page

Now go back up a line and take a look at that page I linked to. Both Carole and Kevan have had some interesting projects through the years I lost track.

Came upon this brief two-set appearance quite by happy accident, which is how most good things occur. We decide to see the whole evening and find ourselves in what can only be described as a 'lesbian bar', let's just say the demographics are becoming more obvious as time rolls on, or I'm becoming more staid. Terrific atmosphere though, everyone seems excited about seeing their friends and seeing their hero.

Both sets are very similar, only one song from the first set didn't appear in the second, Americana. She added Twist of the Knife and a brief foray into Birds of A Feather in the late show.

She opens with a song about the fall of Rough Trade, You Can't Go Back. A little ironic these many years later as she is going back. The band is being inducted into the Indie Artists Hall of Fame in the spring of 2007 and she'll be doing some reunion gigs with Kevan.

For news on current Carole check out her myspace page: Carole's MySpace Page

The set list leans heavily on material from last years Transcend release. Songs not unlike those she was doing in '74, perhaps a little less salacious although with titles like 'Seduction', 'Love Strikes Hard' and the song about eating pussy, 'Edible Flower', it's hard to see where she's mellowed.

Come to think of it, she hasn't changed much, still looking sleek and mean as ever, she's a tight 56, even if she alludes to the toll the years have taken. She's done ok, it seems, having celebrated, surrendered to, then survived the pleasures her new home in LA has to offer.

Big audience favorite was the 'screamo' version of High-School Confidential, her signature song, or albatross, depending on the day, I guess. A world-class pop tune, a aural painting you can visualize without effort. Great lyrics, great delivery. When Carole is finally resting in the tower of song alongside a coughing Hank Williams, a self-deprecatory Leonard Cohen and a medicinally-clean Marianne Faithful, she will be required to play this tune. Hope I'm passing by when she does.

The wonderful 'All Touch/No Contact', which was re-recorded for Transcend was also well received. This song is a classic. As good as anything Cole Porter or Bob Dylan ever wrote, or Elvis ever performed. OK, so I'm prone to hyperbole, it's still great shit. A fusion of tight lyrics and a hot, passionate delivery. I don't think the true genius of this song can be conveyed in words but I'm gonna give it a spin, 'cause words I got.

Three verses, one repeated twice and one slightly shorter than the other two.
The bridge is repeated twice.
Pretty simple, eh? The best ones always are on the surface until you unravel them.

First off, the title: All Touch and No Contact. That's a book all by itself. It plays into the relationships explored in the song and dances around one of the similies. It could be about a marriage 20 years in. It could be about a quick meeting behind the door of the mens room stall.

First verse deals with the girl-girl tryst.
Our protaganist is pushing the face of her love interest away. Carole punches out the words, letting us know who's in charge, if not who's on top. "I pushed, her tense face, away from me./ I pushed her tense face away from me." Same words, subtle difference in the phrasing. The first time she says it the statement is declaratory. The second time it's a narrative description of something that has happened. Something that's happened in a brief instant, while deep in the throes of a passionate embrace, or just breaking from one, perhaps. Has our hero been rejected?
Or disappointed? Or has she seen herself in a mirror? Her partner lays there, with "the hard smile, the voice going on/ like a razor blade on glass." Ouch! That is cold. It seems our anti-diva has bedded her worst nightmare, Paris Hilton. There is a breathless pause between the short laundry list. 'smile' and 'voice', all mouth. That 'razor blade on glass' is just pure magic. Besides being a great methaphor describing the hard, cutting, coldness of the distant or self-absorbed love interest, it also hints of the devil behind the emotions, that other partner of razor blades and glass, cocaine.
After the title line we get the awakening... "it hit me like a slap, all touch and no contact."

The second verse visits a boy-girl hook up. From the outset we see something different in the dynamics of the relationship. "I pushed, his hands, away from me." Guys are always so tactile, eh? Wouldn't be caught dead staring into anybody's face but are ever ready to grope. This tryst seems fueld by booze as all that remains are "splintering fragments of conversation". Or perhaps that's all the guys are capable of delivering. The awakening here is "like a knife in the back". Less intimate than a slap, but definitely more of a 'deal breaker'.

The repeated bridge seems to belong with this verse, sounds like it may have been the denouement of the evening: "Tense my body for the final attack/ All touch, no contact." That's one sad vision of love.

One floating verse, really a precursor to the other two, describes how this mess all gets started as the singer takes us back to early in the evening when she saw "challenging eyes over the edge of a cocktail glass/ hoping i'd react." Or maybe it's the night after, when the same scene gets played out.

As words on the page the song is pretty strong. When performed it's a monster.

Two other points of high interest, besides the excellent quality of the performances of Weapons, was the outing for "Americana" in the first set and Birds of A Feather in the late set. "Americana" is right up there with some of the best descriptive narratives of life in modern, post 9/11 America I've heard this year. That includes Neil Young doing "Living With War", Peaches doing "Impeach My Bush", Billy Bragg singing a new version of "Waiting For the Great Leap Forward" and Randy Newman sardonically poking a stick at the "Great Nations of Europe."
"Birds of A Feather" to close the night was a short and special treat. Ain't nothing like being surrounded my like-minded people and celebrating it.