There really should be so much more in that title...like Mrs. Jack White!
Except she ain't him and that's not what it's about.
Truth be told I wouldn't be going to this show if it wasn't for the Third Man Records connection and that marriage and kids stuff. 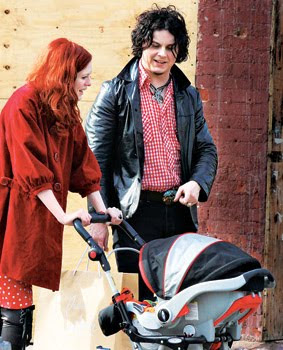 Doors open and there's no telling how. I wouldn't have gotten to Jack White if it wasn't for Bob Dylan and White himself has stirred my interest in other artists, like Loretta Lynn for one. Let's see if his mojo is working on this artist. Quite the limb you climb out on when you're promoting you're other half.

Having said that, I'm looking forward to this show. Karen's made her mark in NYC as part of the cabaret troupe, The Citizens Band,
garnering a wealth of positive reviews for her singing and songwriting. She's been involved with the likes of Robert Plant, Michael Stipe and Cat Power over the years, so it's not nepotism that finds her out here with her solo debut, The Ghost Who Walks.

With Jack's help and her own connections she has surrounded herself with a stellar band for this showcase venture. Accordion and polka rhythms come from NYC diva Rachelle Garniez. My Morning Jacket guitarist Carl Broemel sits in on the country-IOT, pedal steel. Greenhorns, Raconteurs and Dead Weather bassman Jack Lawrence helps out no one on drums, near as I can tell from the website. Mr. Meg White, offspring of Patti and Sonic, Jackson Smith plays lead.

The question is...will this be her road band? Will the Dead Weather lend their drummer? Perhaps Jackson's wife will test out the stage again? Will the kids be along for the trip?

Terry Sylvester performed a short set back in 2008, or was it 2007? at Hippiefest, which explains the memory issue.

The Hollies were inducted in the Rock N Roll Hall of Fame this past March and he's opening a small celebratory tour with two nights at a buffet-and-music club in his adopted hometown. In light of the confusion at the induction ceremony it will be interesting if he has anything to say.

And we're celebrating as well, Monday marks 31 years of wedded bliss, and while we may have more memories behind than years in front, we are still keepin' on.

Terry has been all around the biggest stars that came out of the British Invasion. He grew up near McCartney in Liverpool and an early band of his opened for The Beatles throughout the early '60's at The Cavern Club, including their last club show. If you scroll down that Cavern page you'll find a flyer with The Escorts listed.

Fortune continued to smile, in a rather wry manner, when his band The Escorts were left terribly short of members due to illness. On the same bill, The Hollies. Graham Nash and a couple others came to the rescue...joining Terry onstage 4 years before he officially became part of the group, ironically replacing Graham. In the intervening years he found himself a spot in The Swinging Bluejeans.

Not a bad series of event to get you through the decade. So here we are, 40 years later.

It's 'rock concert lite', a short set with a handful of Hollies originals and a sprinkling of other British Invasion era hits. Pure nostalgia, enjoyable throughout.

Posted by Krewe Chief at 1:53 PM No comments: