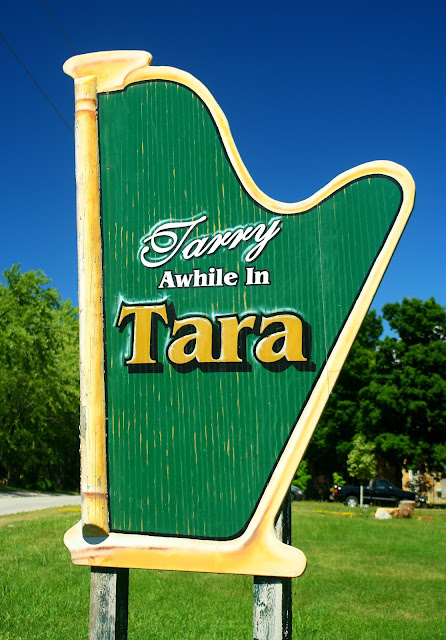 It's been three months since The Change and I never thought being semi-retired would take so much out of me.
The summer has been filled with renovations at the house and a whirlwind pace of getting acclimated to our new environs.
The house: a 10' X 20' deck extension with a 40' wheelchair ramp that leads to the parking pad. Or as we like to call it: freedom. 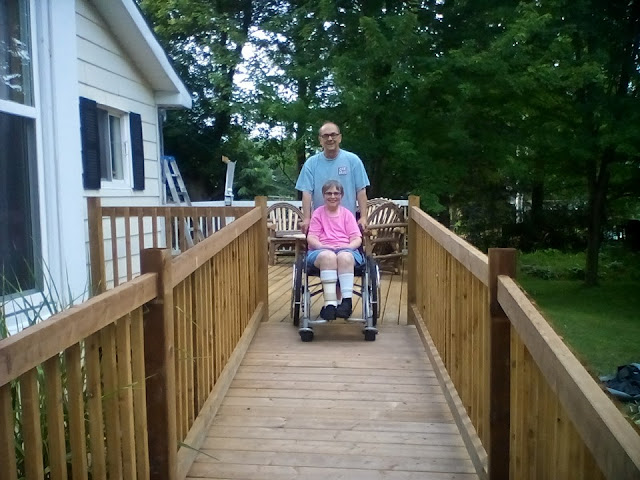 It is not a small thing. Inside we had a stair-lift installed so Cece can make use of the whole house, including a 5'X5' walk-in shower that makes even the mundane things we have to do both easier and safer.

We've painted, installed blinds, had a metal roof put on, installed a new hardwood floor in the living room and, most importantly, turned our deck into an oasis. 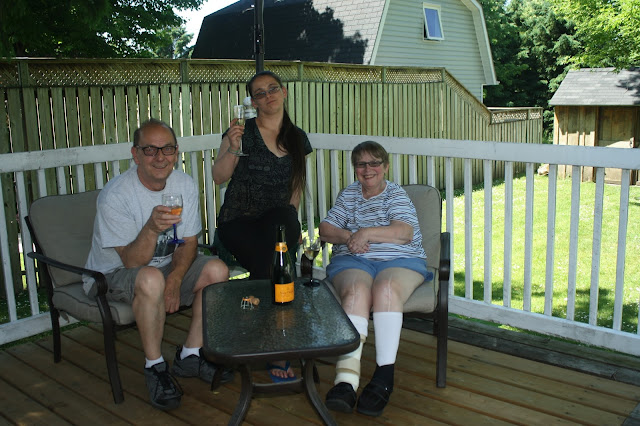 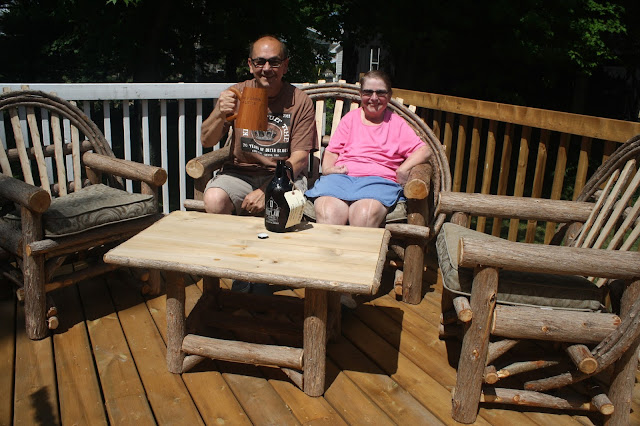 For the most part it's been sunshine and drinks.

And driving back and forth into the city.

Even with all that Cece and I have had more time together this summer than in the last 5 years combined. Cruising the rural roads is life-affirming, pastoral and quiet. 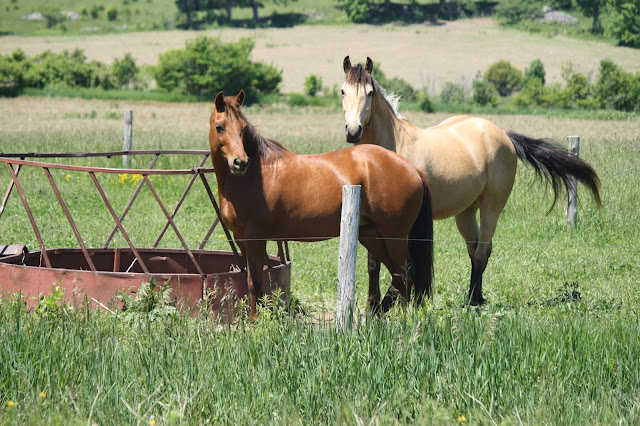 Waking up in the morning to the fresh smell of 'cow' is a reminder that things have changed. 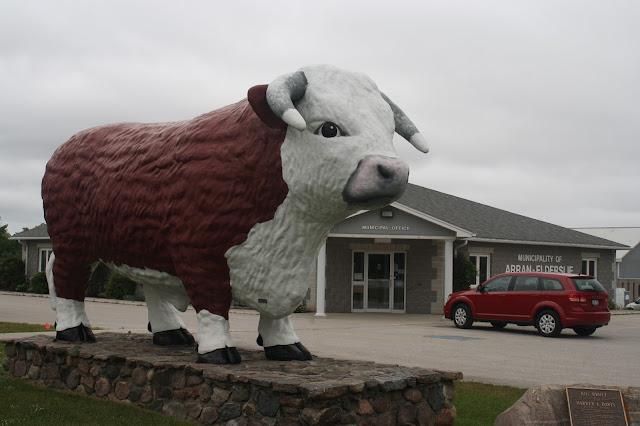 This guy's not so pungent, he's our county mascot, Big Bruce.

We take day trips to local beaches and waterfalls, this one being Inglis Falls, just around the corner. 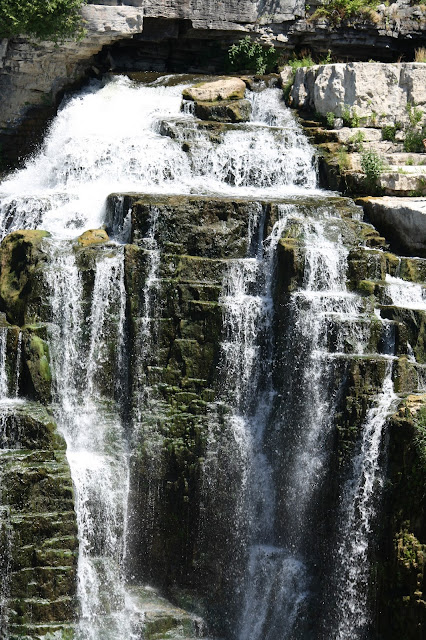 Cece (here with our daughter, Emily) is getting more than her required dose of sunshine. 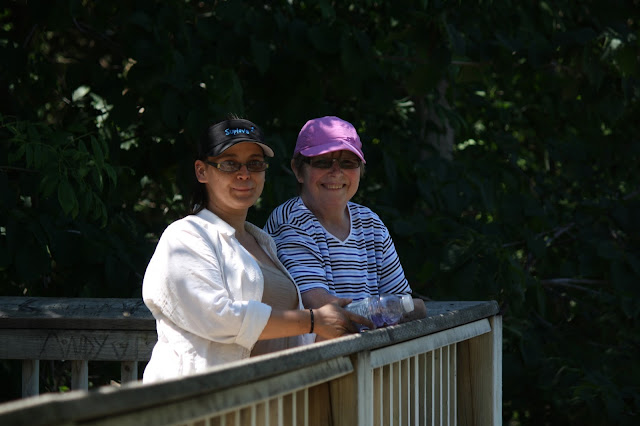 I'm getting the odd workout in too. 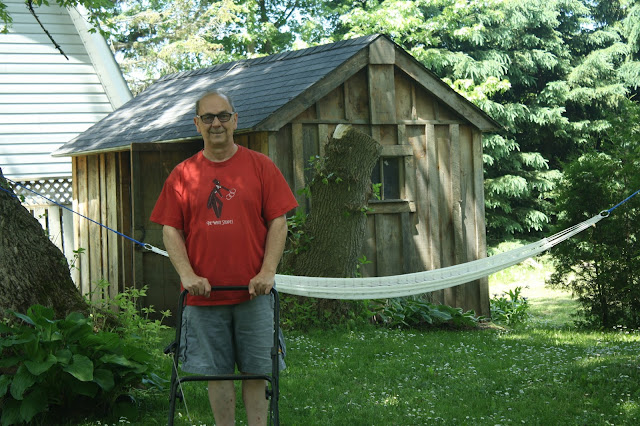 This is my home town, 60 seconds from our front porch. 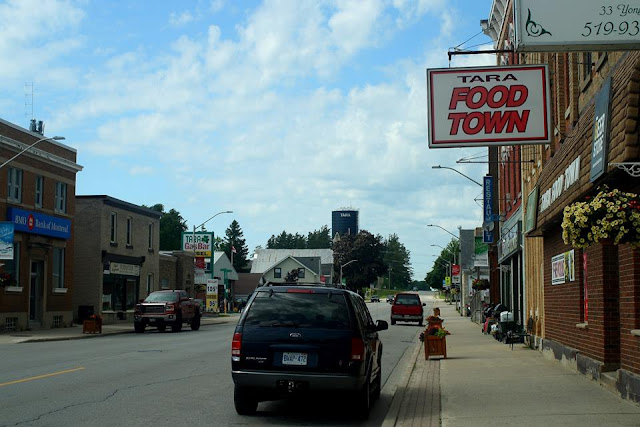 Walk another minute and you are on the banks of the Sauble River. 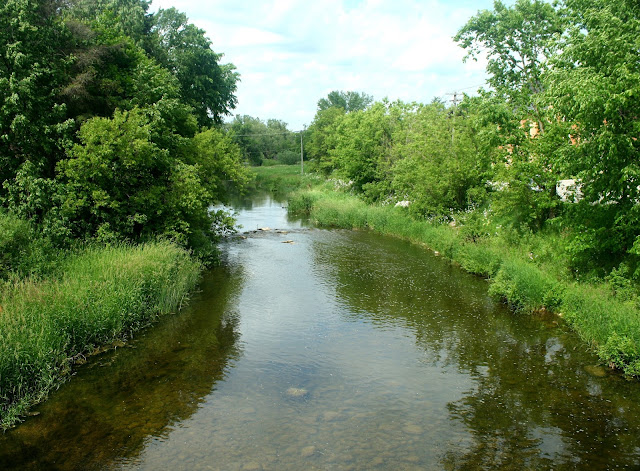 We've had visits from friends at work. 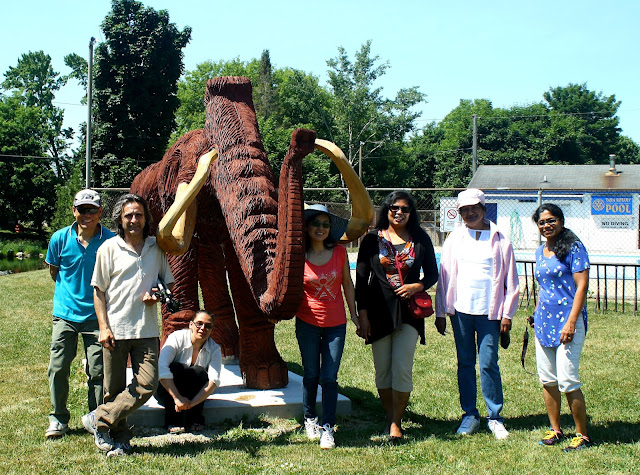 My sister and brother-in-law found their way here as well. 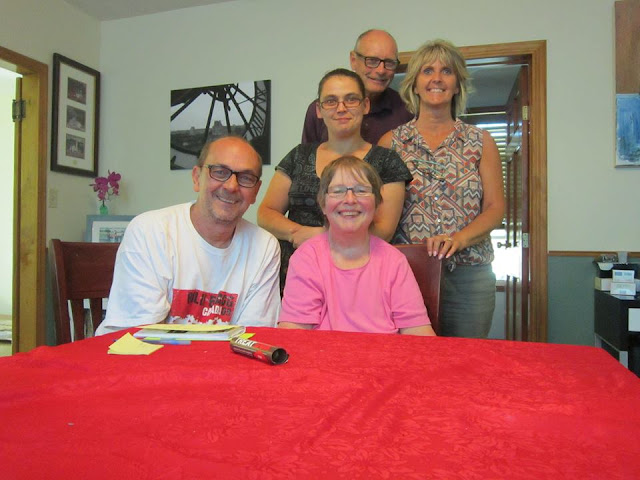 And Emily, with Don's assistance, is making good use of our fire permit. 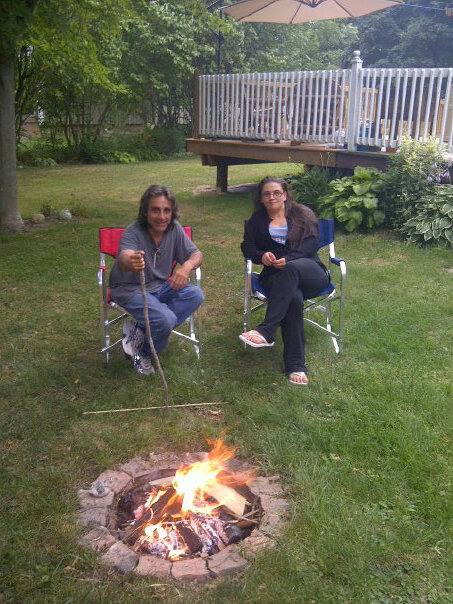 All in all the transition is going well. 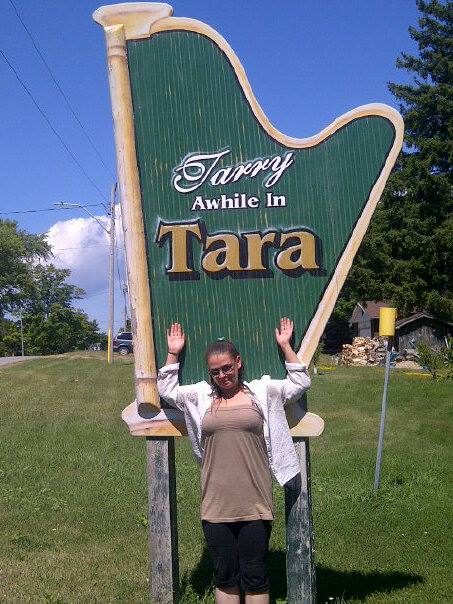 Today Emily gets a 3 day visit from an old friend, who is bringing along her two young children.

We may be a long way from where we were but the world got bigger for all of us.
Posted by Krewe Chief at 7:23 AM No comments: 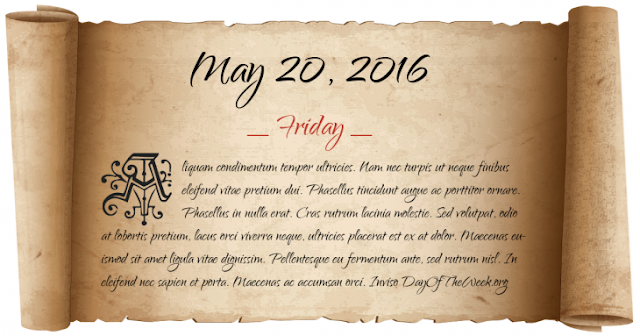 A few years ago I marked November 1,2016 on my day calendar.
It was to be the date I decided WHEN I was going to retire.

You know what they say about the best laid plans.

It's May 20,2016, my last full-time day at work. After 36 1/2 years with the same company I am resigning my position as VP of Operations and taking on a new job of Account Manager - Part Time. This means I am in the office 3 days a month and watching my Blackberry on other days.

Cece and I have sold our Toronto house and purchased a property in Bruce County, 2 1/2 hours northwest of Toronto. We close on Tuesday May 24,2016.

To many around us this may seem like a rash decision.
Unexpected.
It's anything but.
It took a long time to make this choice.

The first time Cece and I seriously thought about modifying our lifestyle to accommodate our reality was in December 2008. She was diagnosed with LABC, an advanced form of breast cancer that had spread into surrounding tissue and was not even measured on the Stage 1 to 4 meter...it sucked that much. A year and a half of chemo, surgery and radiation resulted in the cancer being eradicated.
Our good luck.

We had set on the path to this decision much earlier in our life. By the time I met Cece, at age 18, she had already endured most of the ravages of the Juvenile Rheumatoid Arthritis that has made her existence a little different from mine and yours. Over the next few years, before we got married, we discussed how this might shape our lives. I don't think we knew the half-of-it but we did know we weren't alone on the journey and we were good with that.

All the normal mileposts were achieved...kids and work, careers and travel, we did 'em all. Ups and downs abounded. Good fortune followed us along the way; support of family, support at work and some degree of financial security allowed us to make our way, doing better than the average bear.
Ain't nothing to bitch about there.

The 2008/2009 cancer scare wasn't the first hurdle we had vaulted. There were many speed bumps along the way and more to come. All along, while dealing with these issues, fortune smiled on us and we were able to maximize our happiness.

The late 80's and early 90's were rough, and I ain't talking about how popular music went in the tank. The kids were doing well but Cece's knees were shot, her world was shrinking, her independence was vanishing. A double-knee replacement turned things around. Kids were in school and Cece was back at work...for awhile.

At this point I'd like to take the time to thank the criminals who ran Texaco Inc during this time period. They were found guilty of fucking with Getty Oil in some manner and were ordered to pay $13 billion dollars in reparations. They sold Texaco Canada (where Cece worked) to Imperial Oil (Esso) to raise the cash.
This didn't work out so well for some, who found their jobs redundant. It did work out well for Cece though, as Imperial Oil had a 30 day grace period where all new (formerly Texaco) employees were able to sign on for full extended medical benefits without an physical exam or any bias to pre-existing conditions. She had been required to sign-off on any long-term disability benefits due to her JRA when she began full time work at Texaco. Now she was able to buy extended disability benefits. It meant less take home pay and we were living pay-check to pay-check then...but we made the right choice and signed on.


In 1995 Cece had a medical crisis related to her JRA and how the immune system works. A note on her medical chart stated her condition was "near death". Good doctoring, no praying and a what-will-be-will-be attitude resulted in recovery and Cece being placed on permanent disability.
On the surface that doesn't sound good.
Due to our prudent decision at the time of the Texaco/Imperial Oil deal she ended up with about 75 % of her full time income.
In reality, in conjunction with the freedom I had at work to take leave when I wished, it resulted in our ability to travel the world. From Scotland to Venice to Paris (3x) and many other European destinations. We saw enough of America to allow us to wait out Trump's Presidency before we return. We spent our free time chasing live music and quirky facts about the places we went to to hear it. I wrote about most of this in Confessions of A Dylanomaniac.

Cancer 1 was followed by a broken hip and hip-replacement surgery, cancer 2 and a rapid deterioration of Cece's ankles, resulting in her being wheelchair bound since 2010. I skipped over a lot of hardship there. No need to revisit. In between we did our best; we still travelled for music, we went to Mississippi and New Orleans twice, we slowed down but we didn't stop.

Still, Cece's world was getting smaller.

We continued to do our yearly State of Our Union evaluation. Each year the choices became a little narrower and sometimes we tried too hard to do what we could do before.

In September of 2015 we took a vacation in Paris and the Black Forest. It was great but we had a bigger vision of how we would spend our time than we were able to accomplish. For the effort it took, the money it cost, it wasn't making the best use of our resources.


I haven't posted anything since that trip because we have been busy re-evaluating.

While sitting in a Rose garden off some non-descript alley in the center of Paris, Cece was talking with her sister regarding my incessant muttering about my desire to retire. Theresa told her it would happen within the year if we were discussing it. Cece said, "No Fucking Way." (ed note. You had to be leaving a concert in Pittsburgh PA on November 8th, 2002 to know how funny that was.)

But she was right.

Nothing big ever happens for one reason. It takes a convergence of seemingly unrelated events to result in transformative change . We had a handful at play. What they were are too numerous to itemize here, suffice it to say that work, family and personal desires all came into play.

When this all started to unfold in early January, following 2016's State of Our Union address, I was all..HELP!

As always, Cece was there to lend a hand.

We talked through the issues: our general aversion to change, the thought that I might be abandoning work and my Dad, the economic risk, leaving Toronto...and so much more. We are good with all that.

In the end it is a selfish decision we make together because we can.

Our choice...and trust me, we are all about choice.

Quickly I became all it's my life and I'll do what I want.

Argghhhhh! I say. Fuck ya all.

Being Canadian I say that with all due respect and a silent "sorry".

That was just me processing the guilt, the fear and the excitement of new possibilities.

I was in a whirlwind, but now I'm in a much better place.

"You and I have memories longer than the road that stretches out ahead..."

It's always been the two of us. We need extra time to get there comfortably. We need to focus on moto-vatin' when it's time to go. We've spent a lot of time doing what we had to do in order to be able to do what we want to do. Now it's time to change our priorities.

We are leaving a lot on the table, financially. Leaving the comfort of the city; hospitals and pharmacies nearby, live music just 30 minutes away, family, my daughter's world...all new things to adapt to.

It's scary...but I got a rock who will never quit her faith in me.

I haven't slept well for awhile. I am averse to change...but I'm going to adapt.

Cece and I are standing on the cusp of 60, looking back at 40+ years, smiling hard, really pleased.

We turn around, looking at the road ahead of us and we are ready to be starting over..."it's been so long since we took the time, no one's to blame, my how time flies so quickly..."

We will now measure our success in things we wouldn't be doing if we didn't make this choice.