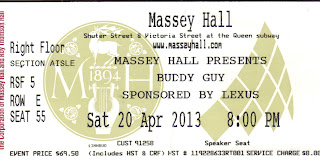 It's 420 and you know what that means. Record Store Day!

It's also the 33rd anniversary of the greatest concert I've ever seen.

The full concert is available on youtube...including opening gospel act.

Had the pleasure of seeing Quinn Sullivan at Lollapalooza last year.  Two sets. He was pretty impressive for anyone, never mind a 14 year old. Haven't seen the old man, Buddy Guy, but better late than never. Buddy is one of the last living links (via Muddy Waters) to the original cast of Delta Blues artists that shaped rock n roll. The wife and I will be heading to Mississippi in a couple weeks for a 12 day road trip, chasing all those ghosts.

Before the show I got to play what I refer to as "The Alf Game" with a gentleman seated behind me. There was this dialogue between Alf and his special interest, as they were courting.

Me: Big blues fans, eh?
Other: We were in Chicago visiting all the blues clubs a couple years ago.
Me: I saw Quinn Sullivan  do two sets at Lollapalooza this past summer.
Other: Johnny Lang is another good young guitar player...though he's in his 30's now.
Me: He's got religion though. Wish they had told us before we drove to New Hampshire to see him a couple years ago.
Other: We saw Willie Nelson at a show with Buddy Guy in upstate New York.
Me: Love Willie, saw him open 7 shows for Dylan back in 04/05, then caught him again, in upstate New York, opening for John Fogerty...while on my way home from the Lang show.
Other: You win.

That was the short version and I'm still digressing.

Quinn makes friends right away. He opens with an 8 minute version of Clapton's Got To Get Better In A Little While, playing mostly chords before he rips into a couple dazzling solos. He follows with a song that is a blues answer song to Hank Snow's I've Been Everywhere. Quinns version is the prelude. (I Ain't Been Everywhere But I'm) Getting There, title cut from the new album. He shows some awareness by name-checking Toronto inside the tune.

His stage patter is limited to "Thank You", "This is from my debut album", "This is from my new cd", and "Thanks to Buddy Guy". That's ok. He's 14 years old and has virtually nothing in common with the baby-boomers in the audience. Except the music and that speaks volumes. He's comfortable onstage and he's going to be as engaging and thrilling a performer as those who have come before him, in his own time, as he grows into it naturally. For now, he's mister professional, moving the show along.

How professional? Well he's already caught on to this trick; third song should be one of your strongest, either your current hit or your signature song. Springsteen was a master of this. My Sweet Guitar is Quinn's love song...totally appropriate for his age. This was his first single, preceding the release of Cyclone in 2011.  The song fits in nicely to the blues tradition of 'double-entendre' songs, like Robert Johnson's Phonograph Blues, only less salacious. Quite the debut.

He follows with another track off the new record, Mr Gloom.
Quinn revers Clapton and he channels him for the second time tonight via Jimi Hendrix through Derek and the Dominos with a rendition of Little Wing. The crowd is totally won over, responding with standing applause at the end of songs.

Now good and warmed up he rips off the surfer-blues title track from his first cd, Cyclone.
Buddy's Blues is a fun biographical piece, almost like Cross Roads Blues lite.  Quinn's cross road was at a Massachusetts concert and this is the tale, from picking up a guitar at the age of five (it was actually 3 but 5 makes for better rhymes), to appearing onstage with Buddy, to tonight's set.

Quinn ends his portion of the night where he started it, in his safe zone...with Eric Clapton, covering Derek & the Dominos Why Does A Love Have to Be So Sad? Great version, he is really testing his vocal skills and they are coming along fine. He goes from an almost falsetto to a growl with some crooning in between and just a hint of a holler.


Buddy Guy is a little difficult to record. While Quinn stepped to the front of the stage apron to display his solo skills to both sides of the venue, Buddy likes to go there so he can chat with the drunks in the 10th row. He plays like he's in a juke joint, even made his way to the first balcony during one song. It's not a bad thing, it's entertaining...but it leaves a lot of dead air in a wave file.

This guy is one of the last living legends of the 2nd wave of blues. Wave 1: You got your Delta, Georgia and Texas blues artists, pre World War II. Wave 2 you have the great migration from the rural south to the urban north and the growth and dominance of the Memphis (STAX)-Chicago (Chess) sound, Muddy Waters, BB King, Sonny Boy Williamson et al Wave 3 the 1960' s revivalists from Clapton to Butterfield, Bloomfield, Stevie Ray Vaughan and Hendrix. Buddy bridges 2 and 3. He has survived a lot of his followers, too many. His greatest notoriety came from being in Muddy Waters band and his own reputation as a boundary stretching innovative guitar player. His style doesn't translate well to a recording. He uses props (drumsticks, his butt) and Patton-esque poses (playing behind his back), things you can't see on a record but that the crowd eats up when done live. So like the greatest, he is a performer first.

76 years young and he's still bringing it. Still playing high-tempo blistering licks and chords. Doesn't seem to be ready for a chair anytime soon. He covers a lot of ground prowling the stage and more. He pays tribute to Toronto for reviving his playing career in the mid 60's, he reappeared at Mariposa 1967. Except for clubs in big cities, and before that juke joints in rural towns, "the blues" had never been a lucrative endeavor, never got the radio airplay it deserved. With it's rebirth in the '60's many old bluesman was pulled out of retirement to regale the newly forming counter-culture; first the beats, then the hippies and finally it fueled the psychedelic blowout that marked the end of that noble experiment. Buddy alludes to this when he tells the story about how he came back to play the blues. In his time it was necessary to play whatever was on the juke box to make your living. Now he was free and he's been at it for over 40 more years.

Corin brought the best of his storytelling talents and the Sundowners, as always, brought their chops. The roll-out of Paper Nickels is still going strong. It'll be heading back out west this summer after a springtime of Southern Ontario outings. You can catch this band almost every Thursday at The Cameron House of Queen St West... 6pm to 8pm.

First set is a showcase of the new record, save for a cover of I'm A Fuckin' Genius and Corin's own piece, 3,000 Miles. Second set has a few more from Paper Nickels but also offers some rarities from Small Time; Blue Mermaid Dress and Wish I Was In Love.

Opening act, Patrick Brealey, who also has a residency at The Cameron (Friday nights at 8 pm) was simply...wait for it...amazing! (Had-to-be-there joke.)

Posted by Krewe Chief at 6:50 AM No comments:

Saw David Bromberg a couple years ago at the horrific Hugh's Room. (That's a place in Toronto where they book acts you have to really focus on yet still serve dinner, drinks and deserts to late comers. When you buy the tickets they tell you that you must be finished by show-time but in reality they just keep on serving and pulling in the money. When Hugh's books someone I want to see I catch them in another town nearby.)


It's a two-fer tonight as he's accompanied by the renowned pianist, Allen Toussaint. As it turns out, he's opening for Allen. I don't know how these things work. Later this summer The Waterboys are opening for Great Big Sea. A couple of years ago Steve Earle was up here opening for Blue Rodeo. I guess there's more to concert billing than "who does Marcel like most"?

We didn't get Sloppy Drunk but it's ok, I was driving tonight.

Showed up for a concert, got a history lesson. Bromberg was generous with his selection, given that he had a truncated set. Up until a few years ago he hadn't played live for 22 years. That would coincide with the early/mid '80's when synth-music was busy fucking up every decent album released (see Marianne Faithfull's Broken English) Not a period in time that would have been tolerant of a folk singer.

But he's back and he brought us something. What we got...delta blues, Appalachian, contemporary blues, traditional folk, contemporary folk and one piece of Can-Con, though most would attribute the song to Steve Earle, perhaps. I mean there were only 9 songs so that represents a pretty broad spectrum from the 'roots catalogue'.

Last song of the night was done at the front of the stage, with no amplification. Unfortunately I was a good ways back so I had to really boost that track to get it listenable. The hiss kinda makes it seem righteously dated.

Roll On John is NOT Dylan's song for Lennon from Tempest.

If this was a Tuesday night, instead of Friday, we may have been heading home now. I came primarily to see Bromberg and didn't really know how the show was being set up. Could have been Allen as part of David's band, playing a few of his own songs. Toussaint's reputation precedes him though, so we settle back in our comfortable chairs.

Allen is his own long long journey through history. He's a friendly, talkative fella who has a pocketful of well-known songs. They are brought to us by artists as disparate as The Grateful Dead (Get Out of My Life, Woman), Ernie K Doe (Mother-in-Law, A Certain Girl), Yardbirds and Warren Zevon (A Certain Girl), Lee Dorsey and Devo (Working in the Coalmine), Benny Spellman and The Rolling Stones (Fortune Teller).

He was a big part of the soundtrack of our youth...whether we knew it or not.