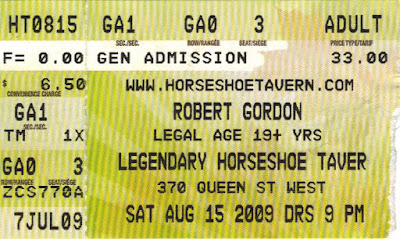 For the last decade or so when Robert Gordon brought his show to Toronto is was at the Cadillac Lounge. For reasons I can't comprehend, this configuration chose to pass on that loyal and lovely venue. But, hey, it's an All-Star band so I guess a The Legendary Horseshoe bar is in order.

Great crowd tonight, very few obnoxious drunks though we had a handful of happy drunks. Got stuck with 'Sir Clap-A-Lot' close to me during Robert's set so I chose to move onto the floor somewhere around Look Who's Blue. Met a couple from Barrie who were in the middle of a marathon biking weekend which involved something that might have been the Harley Olympics in Kitchener and a 5 am road trip to Toronto. While they were a little tired waiting for doors I'm sure the action inside perked them up. Motorbikin' for sure. Met three rambunctious guys from Ottawa and environs who were seeing Robert for the first time in 22 years...and seemed pretty excited about it. They managed to find themselves on the rail and never did return to their seats.

Opening the night are local artists KC and the Moonshine Band. They were a treat as their swamp-rock, Elvis-cum-zombie-schtick, is engaging, entertaining and anything but boring. Tip of the hat to Ronnie Hawkins as the show opens with Who Do You Love? They pay homage to acts as disparate as The Cramps (GooGoo Muck) and Led Zeppelin (Rock N Roll). I will be adding them to my ticketmaster alerts.

This All-Star Band is a gift from Robert Gordon. I'd watch him sing his song list a capella. When he has a virtuoso guitarist like the late-great Link Wray or the still-with-us-and-beyond-belief Chris Spedding, well it's 'bonus fries' time. Tonight he's brought along a couple minor-icons in the rock echelon; Glen Matlock of Sex Pistols fame and Slim Jim Phantom who kept the beat for The Stray Cats.

Now I've seen a few magical shows in my time; The Rolling Stones with 90,000 other people at Rich Stadium in 1975; February 1979, The Clash at The Rex Theater on the Danforth; April 20, 1980 Dylan's magnificent religious show at Massey Hall; Springsteen's 4 + hour show in Detroit in 1980; sometime in the early '80's Iggy Pop did a 24 minute headlining set at the Danforth Music Hall and left the stage swearing at us, Wanda Jackson's 70th B'day show at the Caddy in 2007 and a few more. This one just vaulted into the top 10.

Robert does his magic, bringing songs that are inbedded in our rock-n-roll psyche to the stage. His voice is still terrific as he evokes the spirit of Elvis, Conway and Roy. He always delivers of Springsteen's Fire and never fails to thank Bruce for the song. Rock classics from The Way I Walk to Suspicion to Make Believe are brought alive.

He truly enjoys the fans enjoying the show and that's something you wouldn't see if you were spending $200 to sit in the back of an arena. The other members, from Matlock to Spedding to Phantom, were all-smiles, all-night.

Chris' set was cut a little short tonight to make room for the other illustrious guests. I can't say enough about this guy. I thought a show I saw back in '08 was the ultimate representation of his prowess as a lead guitarist in support. I was wrong. He was ripping it tonight and you could tell he was motivated by the prescence of Matlock and Phantom, each performer driving the other to find a magic moment. Chris delivered many, usually behind Robert's lead vocals. He never stops filling space and this show is great if the only thing you heard was his lead.

Matlock had the unfortunate luck to have a medical emergency in the middle of his performance of God Save The Queen. A young lady fainted. Don't know if it was because she was hearing this song from this artist or because it was a hundred and twenty degrees and the booze was flowing freely. In any case the band called out for help, left the stage for a few minutes and returned to complete the song when said fainting-girl was revived. A weird moment, but ain't that rock n roll?

Slim Jim dropped to massive bombs on the audience with his renditions of Riot in Brighton and Rock This Town. His stand-up drumming was a pleasure to watch all evening as he bounced around in front of and back of his kit.

Robert returns to close the evening with another 30 minutes of superb rock 'n roll. He closes the set with a very rare Make Believe, and though he says he hasn't played it in 15 years, I know he's pretending, because I heard it at the Caddy in '08. The inclusion of Black Slacks was a surprise. Have never heard it live though I've heard the same guy (and I think he was here tonight) yell out for it at every Gordon show for the past 5 years.

John Prine is one our best, most engaging, storytellers. While his story is often told it doesn't wear thin.

Thoroughly enjoyed his 2004 Convocation Hall concert, even though it was a year before I started taping...maybe BECAUSE. Massey Hall is another animal though, a premier venue, historic and elegant, though somewhat less than in her glory days. Downtown early for dinner we saw that outside the gates, the trucks were unloading, roadies sweating it out. The weather was hot, nearly 90 degrees...a good night for a kick-back and enjoy concert.

But tonight I'm hampered by a couple talkative, loud clapping, inappropriate singing, drunks. Which brings me to the biggest disappointment of this year's concert schedule...Massey Hall has a 'stadium license'... you can take your beer and liqour to your seats. Wish that was all that people did. If you come in packing two, grab another two at intermission, leave just before Sam Stone for another two...well, you just know there's gotta be a piss-break in there somewhere. Note to audience: The part of the song where the money goes into the hole in the arm is NOT cause for celebration.


Opening act Carrie Rodriguez brings some Brooklyn moxie to the stage with her solo set. Takes a bit of gumption to stand alone with a fiddle on the Massey Hall stage. The dress didn't hurt though. I was 50/50 on this artist. Loved her when she was raw and skanky...not so much when she slipped into diva-mode. She won the audience over and got a well-deserved encore.


Now you'll have to excuse the guy sitting to my right, his head was exploding and I was praying the pieces wouldn't fall on me. Seems a John Prine concert is akin to a religious experience with him. Not the Catholic kind where everyone's quietly nodding off in the pew but the Baptist kind where every call demands a response. There were so many things wrong with this guy, not the least of which he thought, for reasons unbeknowsnt to be, that I wanted to talk. It's not like I give off friendly vibes when I'm running tape. He also felt compelled to provide harmony on most songs, sometimes accompanied with ill-timed clapping.

Prine was in good humour and good form. The set list was a bracket of his career...heavy on the first record and heavy on the award winning 2005 release Fair and Square. The stuff in between didn't suck either.

We saw The Rizdales back the wonderful Wanda Jackson last December.

Let me tell you it seems like a lifetime has passed in the interim.

Don't think I don't appreciate irony as we find ourselves heading back to the Cadillac Lounge for this benefit show. In December of '08 my wife was diagnosed with an aggressive form of breast cancer. She did a 5 month chemo regimen, followed by surgery in June and is currently nearing the middle of her radiation program. We have been fortunate as the team at Sunnybrook's Odette Center have had terrific success. Her sister, who will be with us for this matinee, was diagnosed in early '09 and is still in treatment. These ladies deserve a party. Also joining us, a third sister; she's the nervous looking one, she doesn't have breast cancer yet.

Great benefit in honour of George O'Connor, father of Tara Dunphy, lead singer and fiddlatrix of the band, who passed away two years ago. Tom Dunphy worked the MC mic all night encouraging the patrons to dig deep in support of the Canadian Cancer Society. By all accounts it was a successful evening.

Musically, it was lengthy. Show opened at 4 pm with a tight set from The Swinging Blackjacks. Next up was Mr Rick and the Biscuits, who did a different version of House of the Rising Sun but were most notable for the young man from New Orleans who was playing slap-style stand-up bass. Local rockabilly icons, The Royal Crowns, who also boast an excellent bass player, rounded out the show.

After a few quick "thank you's" and a raffle draw, we are through with the fund-raising and on to The Rizdales main set. Love the opener, Cash & Carter's Jackson, done with loving eyes and a sardonic smile. Also of note tonight...new songs; It's Not Me, It's You and My New Wife's Kids.

You can see these guys a couple times a month between the London and Toronto dates they do. And they do their share of matinees so you can make it part of a weekend stroll.

Posted by Krewe Chief at 1:18 PM No comments:

Message from a Friend:

Here's Paul covering Cadillac Walk and dedicating it to "Mr and Mrs DeVille" at The Cadillac Lounge (!) last April

Cadillac Walk by Paul James
Posted by Krewe Chief at 12:22 PM No comments: