OK, let us get the Butcher Babies out of the way. 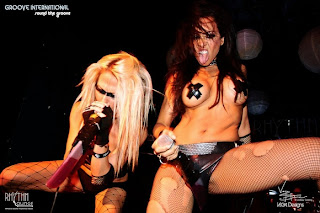 Not your average girl band.
38 minutes of dog-screaming and bouncing breasts.
While mildly amused, I found myself thinking, "But is it Art?"
The audience response was pretty much...who cares, will you look at those ladies?"

Manson was a little more melodic.  Given the competition tonight that's a little like being the best hockey player in Uganda.

I'm here with my 29 year old daughter, it's her nostalgia show. For me it's an in-person look at something I didn't get the first time around. Still don't get it. Marilyn Manson, though, respects the art of the show. He covered his full career, missing only a song from his debut, Portrait of An American Family, 1994, and 2007's Eat Me, Drink Me. He changed outfits almost every song and reprised the theme of all those previous tours. In this small theater, with Twiggy back in the band, it was all you could ask for. Though it's not high on the list of things his fans would crow about, it was apparent he was really enjoying himself onstage, breaking out in huge smiles when things worked just like he'd planned.