Back in the fall of 1978 I had the good fortune to catch a few memorable concerts.

On October 12,1978 Bob Dylan brought his 'homage to Elvis Tour' to Maple Leaf Gardens for an excellent 27 song marathon concert.

On November 3, 1978 Elvis Costello graced the O'Keefe Center with his "2 minute power-pop" catalogue.

On November 11, 1978 Bruce Springsteen was in the Maple Leaf Garden Concert Bowl showing off the power of his Darkness on the Edge of Town Tour.

Had you told me that almost 30 years later I'd see the same three acts within a week of each other, I woulda thought you ... well, if not crazy, at least not very prescient.

As fate would have it Elvis Costello had the opening slot on Bob Dylan's Fall Tour. First time solo in 12 years for Elvis. Just him, his guitars and a bunch of cavernous arena's. 2007 finds him married with children and seemingly enjoying every minute of being alive.

Bruce is back together with the E- Street Band for what could conceivably be the last kick at the can. He's also hot on the heels of Magic...a record that sounds as close to The River as you could hope.

Bob...well, Bob just won't go away, he's in the middle of the longest death scene ever committed to film...or disc.

In 1978 Bob was on the cusp of his great religious conversion, a year removed from an acrimonious divorce and two years or more removed from the success and failure of the greatest rock tour ever, The Rolling Thunder Review.

In 1978 Bruce was returning from a forced three-year hiatus following the legal wranglings after Born to Run and putting on the best show a little money could buy.

In 1978 Elvis was dead and Elvis was exploding on the North American scene, buoyed by the great production of Nick Lowe and riding the crest of the British New Wave invasion.

These artists, while different in so many ways, have similarities as well.
Most obvious...they are saddled with a narrow public view of their output.
Elvis will live in our minds, forever bespectacled and knock-kneed.
Bob is that lone figure in the spotlight, harmonica rack and guitar, singing topical songs.
Bruce is a grease-monkey with a babe for a girlfriend.

Elvis took all of 3 seconds to cover the ground from side-stage to center stage. He picked up his guitar on the way and before the crowd even knew it he was into The Angels Wanna Wear (My Red Shoes). The well-paced, but not frantic, vocal delivery belied the speed at which he was playing the chords. This was machine-gun-acoustic-arena-rock, if such a thing exists.
In strong voice he leads us through some new songs, with a heavy political bent to his stage chatter. Suffice it to say that as much as he might like to mow the lawn he ain't a big fan of bush.

Oliver's Army was the surprise of the night and in these mercenary times it fit in quite well.
Next best moment was getting the Nick Lowe gem, What's So Funny 'Bout Peace, Love and Understanding.
We were also treated to an extended mix of Radio Sweetheart and Van Morrison's Jackie Wilson Said, complete with sing-a-long.

But every song was stellar. The frenetic, salacious ending to From Sulphur to Sugar Cane (where Elvis inserts a city-specific and rhyming alternative each night) may have been the height of concert, even in the midst of these great tunes. In Albany the line was "the girls in Poughkeepsie, take their clothes off when their tipsy/ but in Albany New Yawwwwwwk, they love the filthy way I talk...." A rollicking good time.

The most impressive element of the set was the joy with which he attacked the songs both new and old. It was also strange to see the post-punk, new waver taking on the mantle of 'voice of a generation'. His sound and his attitude have matured over the intervening years, it was a pleasure seeing him do his stuff.

There's a torrent of this show running at dime.

I hadn't seen Bruce since the Born in the USA tour. Didn't like the way his career was going then...he was destined to start thinking too much of himself, or the critics were going to do the same. The shiny, buffed pecs of the Born tour did not jive with the kid from Jersey ethos. The marriage to the model didn't help either. Then that "double LP" release where two separate records were issued on the same day, but not a double album, two separate records. His capacity to tell me things outstripped my capacity to listen. But there was no denying when you went to see Bruce you got your money's worth, so I'm looking forward to this incarnation/reunion.

'Course, at $133.00 per ticket they're also asking for more money, so the ante has been upped.

As it turns out Bruce has put together almost the perfect show for a lapsed-Boss-fan. His new album, Magic, sounds like The River. The show opens with a calliope crashing to the ground...ok, maybe it was just playing but that sound is the heart of this band. The new songs, while having a broader subject matter than the trials and tribulations one might encounter in Spanish Harlem, still evoke the same longing for a world-gone-right in place of what we have.

Highlights of the show were many. Going into the venue I had 4 songs on my 'wish list': For You, She's the One, Rosalita and Candy's Room. I had an expectation I'd get one. Turns out Rosalita was the one I didn't get. Candy's Room followed by She's the One was absolutely terrific. A wonderful version of For You was worth the ticket price all by itself. The inclusion of Incident on 57th Street just made it like Christmas. Even with all that the show-stopping song of the night was a full-band, full-throttle version of Reason to Believe.

Bruce sings a little slower but he didn't miss a lyric and there was all the passion you could hope for.


There's a torrent of this show running at dime. 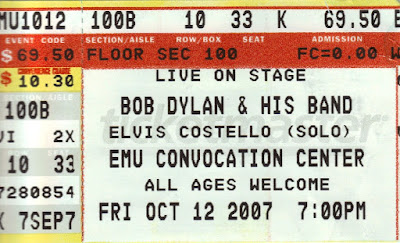 As Graham Parker once mused, "passion is no ordinary word". In the case of Bob Dylan and his live performance art...it is the be-all and end-all. And it's what is sadly missing from this current incarnation of Dylan. Sentiment has replaced passion and I find myself on the outside looking in, standing next to Mr. Jones, vaguely aware that something is going on but unable to define it. Or uninterested.

Looking back I realize the moment for Bob was likely that weekend in the fall of 2002 when he taped the video for Cross the Green Mountain. Even as Charlie was setting the stage on fire at George Mason with his last performance in this band, Bob was looking forward to shedding off one more layer of skin. And now he's in a cowboy band, and while it may be technically proficient, it's kinda boring.

What has actually happened is that for the first time in my long career of listening to Dylan he is speaking to me from a 'future voice'. When I first came upon his music in the early '70's I had a wealth of material to uncover...all of the '60's. I was looking back, to attitudes and platitudes of a previous time. It was easy to find context, to make it fit.

For many years after that we were running a more-or-less parallel course through life but he's reached a time, being 15+ years older, where he's speaking to me from the future and it's likely my shortcoming that I can't take what he has to say to heart. I'm sure there'll come a day when I look back at Modern Times and say... "hey, he knew what was happening!" But it won't be tonight and it won't be here.

So I have nothing to say about the show except you won't need a doctors note to attend.

There's a torrent of this show running at dime.

So what did I learn?


i saw the best minds of my generation destroyed
devoid of conviction, conflicted, annoyed
kicked at and worn down
666
beat lookin' for the next quick fix
unpopular prophets and problems
up against angels in disguise who wanna rob them
they didn't want to end up crushed by god's embrace
in the age of the cold wind, blowin' dogs in space

space is a fake, the felonious drunk
empty rooms haunted by thelonius monk
felonious punk with plate glass squares
who see empty eyes and look straight past theirs
tree walking cheetahs with a gun in each hand
you are lost at sea, you're desperate to reach land
orpheus descending swimming in the crooked waters
hello sid vicious good bye Brooklyn Dodgers

Chorus:
no joke, hit the low note
we all go to heaven in a little row boat


1957 Chevy Bel Air interior velvet special
playing poly-stereo Buddy Holly ,Elvis Presley
Black Flame Trilogyquadruple outer bass
battle sites, Little Rock , satellites in outer space
words won't help but a few bugs can
crew cuts and black leather, Ku Klux Klan
men wear hats, in fact ?heroin is shared?
opiates addicted to and parents are scared
the underground is real
deliver brains deliver queens?
perpetual motion, emotion, free thinkers and libertines
suffer alone all night with pains
hooked on drugs and a fight with chains
there's Faulkner and Baldwin
?? and some who curse reality
spy-vs-spy and the cult of personality*
what can the numbers and the words in my head mean
kilroy was here and so was Buster Crabbe and Ed Gein


1957, the pen keeps moving in attempt to sink the jingos
fight 'em with Hula Hoops, Frisbees and pink flamingos
up running all night, late sleep ordered
Have Gun Will Travel, Great Leap Forward
man on the corner with dark glasses free an' preachin'
appetite is monstruous, diet is Dionysian
all over the world, so much peril in one show
playright Arthur Miller marries Marilyn Monroe*
(ed. note: oops, seems like a 1956 happening)
hard rain fallin', baby sleepin' in god's palm
alarm clocks ringing, warrior monks and bomb squads
Invasion of the Body Snatchers*
corporate obedience, believers in numbers
speed freaks and bohemians
red is the new black,identity files
rebels and grand dragons, obscenity trials
the lead is Bobby Fisher, the country, no part is red
just black-and-white, Humphrey Bogart is dead
Posted by Krewe Chief at 11:40 AM 1 comment: